Badtripe Critical Essay #1: Katy Perry Lyrics – Why are they so weird and fighty?

Now please understand all of you that the author of this tremendous blog does not listen to pop music. No way. I’m cool in case you hadn’t already realised. I listen to bands that you’ve never ever heard of and definitely wouldn’t like. And if by some bizarre happenstance you actually heard one of these super unknown bands and liked them then that would mean that I would not be able to like them any more and I would immediately denounce them as ‘mainstream’, that’s how awesome I am. I can tell you’re impressed.

Sometimes though I do listen to the radio because I just like to know what’s going on with the kids. The author is not getting any younger and I like to keep up to date with the saccharin tainted, ethnically confused, dead eyed puppets who the younger generation are forced to look up to in order to shape their horribly distorted view of the world. Plus we have the radio on at work sometimes, as a treat.

I think what strikes me the most when listening to pop music is that it is actually quite clever, in a way. Pretty much all pop songs are played at the same speed, which is about 128 BPM (that’s Beats per Minute if you’re a fucking moron). This is because the human brain and body respond positively to a 4/4 beat at about this speed, it’s invigorating yet comfortable. It’s just the right speed for activities such as running or dancing, it feels good. Then there’s the hooks, just a memorable line or two in the chorus, doesn’t really matter what it is as long as it is easy to remember and to sing along to. That’s why most people when they’re singing in a car or in their bedroom will mumble along to three quarters of a song and then just blast out the three lines that they do know, we’ve all done it. It’s genius really. This simple formula works time and time again and it’s brilliant because whoever writes the lyrics is free to put just about any words they so wish in to the song and it really wouldn’t make a blind bit of difference. If One Direction were to recite an algebra textbook or a Shakespearean soliloquy over a cheery tune then their fans wouldn’t be in the least bit perturbed as long as they still had a catchy chorus like, “Ooh girl, cup my balls, every day and night!” I actually might pick up the old six string when I get home and write that badboy and send it to Simon Cowell. 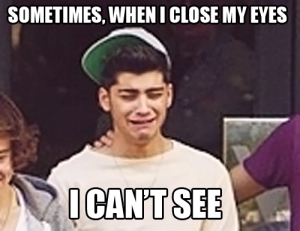 As well as all of this though, the folk who write the lyrics to these songs are always desperate to convey some kind of message, something that unites the fans of these artists in to a common frame of mind and a shared sense of togetherness. It’s usually something along the lines of “We don’t care what our parents say, we do what we want.” See Billie Piper’s seminal masterpiece ‘Because we want to’ (1998) for further reading on the subject. Or it’s usually some scantily clad lady who hasn’t cottoned on to the fact that she’s being horribly manipulated by a phalanx of cigar smoking, Asian hooker wielding, despicable old men piping up with something along the lines of “I’m an independent woman I don’t need no man to pay my bills but I do have to grease myself up and gyrate in this bikini or I’ll be dropped by my label and working at Poundland before the week’s out.” (Beyonce – ‘Grease me Up Mister’ 2009). 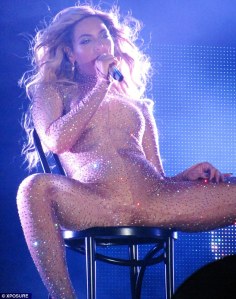 The thing I’ve noticed though is that some of the lyrics are just downright peculiar. We’ve all heard the lyrics of crazed Columbian gakhead Shakira “Lucky that my breasts are small and humble so you don’t confuse them with mountains” (Shakira – ‘Finest Columbian Chang’ 1991) but even these frankly insane lyrics do actually kind of make logical sense if you think about it. If her breasts were the size of mountains then you might actually think that they were two mountains which could have disastrous consequences so it’s lucky that they’re small and humble. Fine. Some lyrics though just seem to miss their own point entirely and end up constructing ideas and images which must be confusing for all of the impressionable tweenies out there. Let’s analyse one of the weirdest ones I’ve heard recently :- 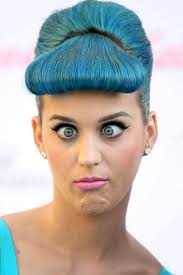 I really do not understand this song at all. It starts off with a fairly sinister tone;

I knew you were
You were gonna come to me
And here you are
But you better choose carefully
‘Cause I, I’m capable of anything
Of anything and everything

So here we have the character of a young man, drawn to Katy Perry like a moth to a flame, or like Frodo walking straight in to Mordor. Katy has a warning for our lovestruck young fool, beware young man, beware because, “I’m capable of anything and everything.” Ok, could be that she’s talking about breaking your heart, could be murder. Either way you may want to give Katy Perry a wide berth. Then we have the chorus;

Baby do you dare to do this?
Cause I’m coming at you like a dark horse

Right…….I’m not sure Katy has fully understood the metaphor she is attempting to use here. “She’s a bit of a dark horse.” Fine, we all know this to mean that she has hidden and unexpected qualities that may be surprising to those who seek to underestimate her, we can relate to this. However, “I’m coming at you like a dark horse” is just a frightening image. If I was being charged down by a horse, dark or otherwise I’d be pretty frightened and I’d run in the opposite direction for sure.

The second verse is just nonsense;

Yeah most people call that ‘flying’ Katy. You rarely hear people say, “Look at that bird levitating out of its cage.”

Then the next bit;

But down to earth
If you choose to walk away, don’t walk away

What K-Pay alludes to in the first half of this song, Juicy-J states explicitly in his third verse rap. Hold on a sec, Juicy-J? (Hi I’m Juicy-J!) Christ on a bike.

While Katy is confused by the use of metaphor in her verse, at least J has made an effective use of simile in his rap. Remember back to your English classes at school it’s not that he’s saying she is Jeffrey Dahmer it’s that she’ll eat your heart like Jeffrey Dahmer. I think when you’re using poetic license and literary techniques in song writing it’s usually best to try and create interesting, thought provoking imagery within the lyrics, there’s no reason why you can’t be a bit obscure, in fact the weirder the better, you can get away with it after all. In my opinion the essential flaw in J’s line is that it’s a touch too direct, a little on the nose. Obviously eating people’s hearts (as well as other body parts) is exactly what Dahmer did and so it kind of defeats the point of drawing the simile in the first place. It just leaves us with an image of a demented Katy Perry feasting on the congealing organs of her unwitting male prey. Man that girl has been hurt, hurt I tell you!

So the overall message of this song? Don’t fall in love with Katy Perry or she will kill you and eat your corpse. Brilliant.

I can’t even be bothered to go in to a full blown analysis of Juicy-J’s rap, it’d take too long but special mention has to go to the line;

She can be my Sleeping Beauty
I’m gon’ put her in a coma
Woo!

So I guess the overall theme of killing/eating/permanently incapacitating the object of your affection works both ways in this song. It’s definitely one for all of the confused, hormonal, potential murderers out there to enjoy! I personally enjoyed it very much and give it a strong 6 out of 10.

One thought on “Badtripe Critical Essay #1: Katy Perry Lyrics – Why are they so weird and fighty?”