I’m sorry for being a dick

My New Year’s resolution for what it’s worth is simply to stop being a complete and total dick, in all manner of situations, towards people who are only doing their jobs. Sounds reasonably simple but for some reason I do keep getting myself in to these awkward situations and finding that I’m unable to stop myself from being a dick. It’s almost like I’m looking down on myself, seeing the scenario unfold, behaving like a total and utter pompous arsehole but being unable to stop myself from doing it. It’s like some sort of weird, Pavlovian response mechanism like I’ve been somehow pre-conditioned to behave in this way, which begs the question of Nature vs. Nurture. Am I just inherently a total dick or am I in fact just a product of my environment? This is what we’re going to explore but first here’s a brief example of the sort of thing I’m talking about :-

#1 – Buying coffee from a service station

I order a medium latte and a bottle of water. I know it’s going to be expensive but nothing prepares me for the violent insult of being charged £5.41 for these two meagre beverages. WHERE DOES THE FUCKING 1 COME FROM?? WHAT IS THE POINT OF THAT!!!??? I check the change in my pocket as I cling to the belief that if you’re spending the change from a previous cash withdrawal rather than starting a new transaction then you’re effectively not spending any extra money. The change in my pocket totals exactly £5.40. I already know that this will not be accepted and I’m not willing to lower myself to the rank of common beggar. It’s like a perfect storm at this point, I am apoplectic with rage but just managing to maintain the thin veneer of social acceptability as I hand over my card as if it’s my anal virginity. Then the woman on the till asks :-

“Can you just check that the amount is correct?”

It’s at this point that the change occurs. I’ve exited this mortal plain and I’m just floating on a cloud of ethereal indignation and I reply :-

“Yes, unbelievably that is the correct amount.”

Now the woman behind the counter has interpreted my dickish, sarcastic comment in the wrong way. I meant, “Yes. Although that is a preposterous amount of money to charge for a coffee and a water, it is in fact the correct amount as displayed on your tariff.” She thinks I mean, “You typed it in to the machine, why would it be wrong? Are you in fact a moron?”

To her eternal credit she maintains her professionalism and simply replies courteously, “I’m just required to check that the amount is correct.”

Then I start cranking it up to dick level 9 by attempting to actually explain my “joke” to this poor woman.

“No, no” I stammer. “I realise that. I’m just saying that although it is technically correct, it’s still a ridiculous amount to pay for one coffee and one water.”

There’s a queue forming behind me. She now thinks I might be haggling or refusing to pay. I can see the mild panic setting in, the kind associated with the unpredictable knobhead in public. She doesn’t reply, what could she possibly say? What am I looking for anyway? An apology? Do I want this perfectly polite lady, who is simply doing her job, to apologise on behalf of Costa fucking coffee for charging the sort of prices one might associate with a hyper-inflated, Zimbabwe-esque economic meltdown?

I put my card in the machine, pay and get the fuck out of there with my lukewarm, bitter, raw sewage tasting coffee and replay the situation in my head to assess where it was I could’ve done things slightly differently.

So there you have it. This is the sort of thing I just can’t help doing. It’s somewhat ironic that my job largely involves being castigated by small minded, petty individuals who think that I am solely responsible for every single action carried out by the organisation which I represent so you’d think I would’ve learned to be less of a dick in these situations. Well I am trying (sort of) so go fuck yourselves. Anyway I digress, it’s not just me who is affected by my dickish behaviour, my wife, bless her, has to put up with numerous scenes of this nature as I try to ruin happy occasions thus…

Always a potential minefield for the perpetual dick. I tend to ask a lot of unnecessary questions and tend to get quite dickish when the poor waiting staff don’t know the answer. I got put in my place quite brilliantly once in Wales though, they don’t take any nonsense from out-of-towners as this conversation illustrates :-

“What ales do you have on today?”

“We’ve got one bitter I think.”

Anyway one classic example occurred while my wife and I were honeymooning in Venice this year. I know right?? Honeymooning! You’d think I could’ve managed to reign it in slightly for our honeymoon wouldn’t you but no way! I’m a constant dick, no downtime. Fully committed.

We were having dinner at a lovely little restaurant right on the grand canal and my wife wants to order the gnocchi with scallops, thyme and lime zest. Quite an unusual combination and I immediately become concerned that she might not like it, and then I’ll be sat there, enjoying my lamb ragu and feeling guilty while she politely chokes down her raw uncooked scallops and we both won’t enjoy ourselves. Now, you’re all reasonable people and you’re probably reading this going; “For fuck’s sake Rick your wife’s a grown woman and knows her own mind just butt out you total dick.” BUT NOOOOOOOOOOOO!!! I’m that much of a dick that I have to second guess my wife at every opportunity and I will always assume that I know better than she does what she will or will not like. So the inevitable happens and I start trying to converse with the Italian waiter who doesn’t really speak English….

“How are the scallops cooked?”

“Yes are they fried in a pan? Pan fried?” I’m mime-frying scallops in a pan at this point, looking like an absolute dick.

“It is err…like a small fish.”

“No, no I understand that thank you but in what manner is the scallop prepared?”

I then decide to launch in to the internationally recognised language of the travelling dick; talking excessively loudly, in words of one syllable where possible.

I’m sweating, people are looking over and my wife is on the verge of quite rightly getting up and leaving the restaurant but manages to stop me in my tracks with a look that only she is capable of and I finally stop embarrassing myself and just let the poor waiter get on with taking my poor wife’s order. As I slowly begin to regain my composure and my semi-rational view of the world restores itself I realise what a dick I’ve been. Could I have stopped myself? We’ll never know. To my wife’s eternal credit she is still married to me despite the fact that I’ve repeated this scenario at least once and engaged in the following horrendous display of dickery at my own birthday which she’d organised :-

I’d ordered a ribeye steak and what arrived, to my absolute horror, was a rump steak. Or at least it may have been, who the fuck knows? I certainly don’t (I definitely do) but anyway I couldn’t just sit there and accept it so as not to spoil the evening could I? Nope. I had to start some weird kind of upstairs/downstairs thing off with the poor unsuspecting waitress. Apparently it went a bit like this :-

“Excuse me. Just come and have a look at this please.”

“How can I help you kind sir?”

“I’m sorry I don’t quite understand…”

“YOU SEE THAT? DOES THAT LOOK LIKE A FUCKING RIBEYE STEAK TO YOU? DOES IT?? YOU EAT IT! GO ON! EAT IT! EAT THE STEAK UNTIL YOU DIE!!!!”

I’m informed that that is basically how it went down but I can’t quite recall it accurately although that does sound a lot like a normal evening out with me. I’m a dick you see.

#3 Getting a parking ticket

Been in this situation a few times but one particular occasion stands out in the mind. I’d just nipped out to do a bit of shopping with the wife and I’d parked in a side street in what I thought was a 1 hour free parking zone. Upon arriving back at the car I saw a parking warden, a lady one no less, hovering around my car. Knowing that I was well within the 1 hour time limit I smiled smugly and shouted “Shoo! Buzz off you, get outta here!”I failed to notice that her smile was just slightly more smug than mine as she sashayed away down the street and then I noticed the ticket on my windscreen.

I was 100% convinced that I was in the right so I shouted “OI!!” and proceeded to chase the parking warden down the street.

“You were parked illegally.”

“On one side of the road it is but on that side it’s resident permit holders only.” The smug bitch.

Now I know at this point you’re thinking “Rick, stop being so hard on yourself, you were well within your rights, everyone hates parking wardens.” And you’re absolutely right but that’s not the bad bit.

It was during the ensuing tirade of abuse that I was hurling at the traffic warden that an old lady came hobbling past with a stick and screeched, “Leave her alone she’s only doing her job.”

I became distracted from berating the traffic warden and immediately rounded on the old lady and shouted “OH SHUT THE FUCK UP!!!” Straight in to the wizened old crone’s face. By this point my wife had just walked off, people had stopped in the street to observe and I realised I’d crossed over the fine line between righteously aggrieved citizen and total, complete and utter dick. 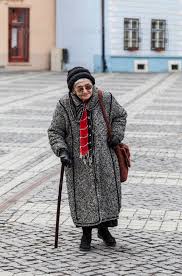 I’m not apologising for this one though. I fucking hate traffic wardens (even though they are only doing their jobs they’ve chosen a shit job spreading misery wherever they go) and old women have no business sticking their hooked witch’s beaks in to my personal affairs.

I will continue to boo traffic wardens (and old people) in the street.